Injury due to salt is most common on landscape plants growing adjacent to highways, streets, sidewalks, and driveways that are regularly salted during the winter for ice control. Most of the salt used for deicing purposes is sodium chloride, ordinary rock salt or table salt. On highways, the major problem to plants is caused by salt spray kicked up by fast-moving traffic on wet, salted roads. The salt spray is deposited on adjacent plants causing dehydration of evergreen leaves. In the city, the major problem is salt runoff washing into the soil. Salt in the soil may be absorbed by the roots and cause direct toxic effects. 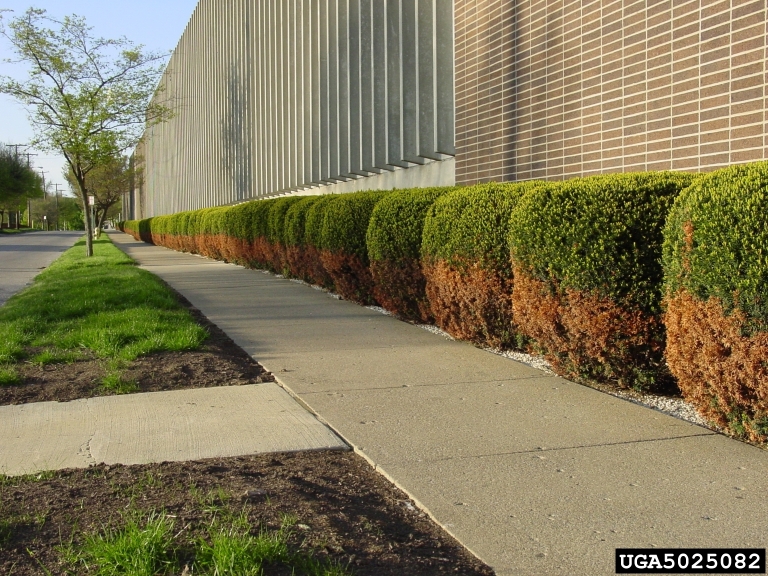 Salt spray causes bud death and twig dieback. Subsequent shoot growth at the branch base produces clusters of twigs known as “witches’ brooms.” Symptoms typically become evident in the spring. In evergreens and conifers, salt spray causes leaf browning or yellowing, needle tip flecking, and twig dieback. Salt in the soil is slower acting and may not affect plants for several years. Symptoms include an initial blue-green cast to the foliage, marginal leaf burn or needle tip burn, reduction in leaf, flower and fruit size, premature fall coloration and defoliation, stunting, and a general lack of vigor. The symptoms often become evident in late summer or during periods of hot dry weather.